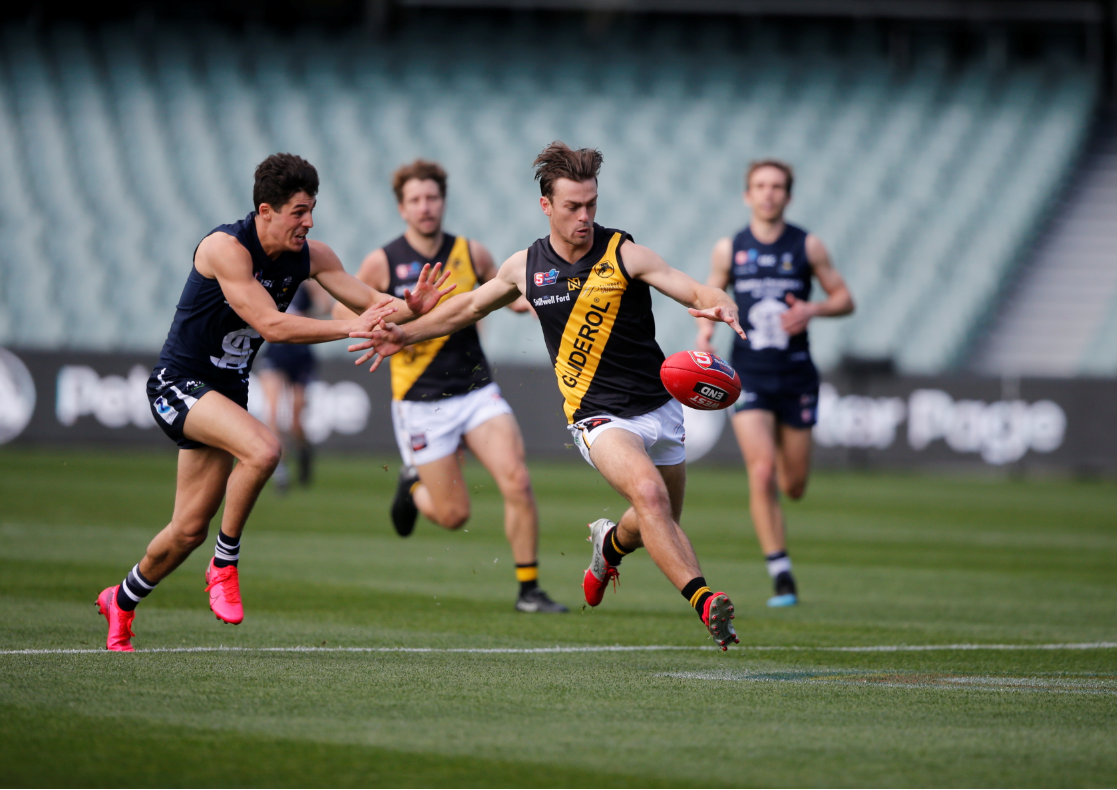 Glenelg survived a spirited comeback from South Adelaide to hold on for a pulsating five-point win in the first game of a double-header at Adelaide Oval.

Seemingly coasting toward a convincing win after establishing a 45-point lead at the final change, the reigning premier was forced to defend grimly as the Panthers piled on seven of the eight goals kicked in the final quarter.

And Jarrad Wright’s men nearly had a chance to steal the premiership points when, trailing by six, energetic South forward Eamon Wilkinson, who had earlier nailed a nice set shot from 50m, soccered off the ground for a behind.

Wilkinson had been awarded a free kick for in the back but elected to play on amid the drama, his opportunistic shot just falling to the left of the goal post.

The Bays – who had lost wingman Carl Nicholson to a heavy head knock earlier in the term – were then able to hang on for the next 90 seconds until the final siren sounded much to their relief.

Had South played with the same dash earlier in the contest, the result could have been very different as Glenelg took a stranglehold on the match with its unselfish play.

Leading by a goal at the first change, the Tigers produced an attractive brand of football which allowed all players to get involved through the use of handball.

They ended up having 53 more than South, which was no surprise given the way the ball was shared around inside their attacking 50m arc.

Premiership forward Marlon Motlop – one of his side’s best with 25 disposals, seven tackles and nine clearances – was the beneficiary of this in the second term when he booted two easy goals.

And when a chain of four handballs in succession resulted in AAMI Rookie Callum Park booting his first League major in the goal square, it looked like the Bays were on their way to a percentage-boosting win.

Magarey Medallist Luke Partington started much stronger than Round 1 before finishing with 34 disposals, eight clearances and three goals, the third being the Tigers’ lone scoring shot for the final term as he coolly finished on the run after an intercept at half-forward.

Jack Oatey Medallist Matt Snook was his industrious self in the middle with 29 disposals and 11 clearances while Brad Agnew laid a staggering 15 tackles to go with his 21 disposals and five clearances.

Glenelg’s scoring was spread as key forwards Liam McBean and Luke Reynolds booted two each as recruits Billy Stretch, Matt Allen and Park were among those on the goal kickers’ list.

Captain Max Proud defended valiantly in his 100th Statewide Super League game, alongside premiership skipper Chris Curran who returned to the line-up after missing Round 1.

Ruck recruit Jack Hannath dominated in the ruck to tally 42 hit outs with his 15 disposals in just his second game for the Bays.

South had few standout performers having been outplayed for the majority of the contest, co-captain Joel Cross bringing himself into the game during the final half hour to finish with 24 disposals and seven clearances.

The Magarey Medallist was also heavily involved in the last play of the day handballing over the top before snapping into the path of Wilkinson at the top of the goal square.

Defender Joe Haines (21 disposals and seven marks) was steady in defence while also starting up on the wing at times while Matthew Broadbent had his moments for 19 touches and five clearances.

Several of South’s locally-bred youngsters continued their impressive development, with Hayden Sampson showing off his speed nicely to rack up 17 disposals and three goals.

Inclusion Luke Bogle booted two goals to match Wilkinson while Zac Dumesny kicked an important set shot goal in the third term after being rewarded for a strong tackle on Motlop.

West Adelaide wasted its fast start as Central District surged back to record the first draw of the Statewide Super League season.

The Bloods bolted out of the blocks to boot the first six goals of the game, opening up a 39-point lead when Murray Waite converted a pass from his captain Tom Keough 24 minutes into the first quarter.

It triggered the Bulldogs’ slow burn in working their way back into the contest, closing the gap to four goals on the back of John Butcher booting the first of this three majors after making a surprise comeback in the No.51 guernsey sported by premiership skipper Daniel Healy.

West’s Pat Fairlie kicked a fine finish on the run from 35m against the flow of play to open up a five-goal lead entering time-on of the third quarter.

But the Bulldogs got a spark from premiership midfielder James Boyd, who kicked a nice goal after a sidestep from close range in the 25th minute.

Enter Nick Lange. Just 24 hours after he was announced as the Round 1 Powerade Breakthrough Player, the smooth-moving Central wingman burst into the game after enduring a quiet first half.

The blond bombshell kicked a pair of set shots from a testing angle – on almost exactly the same piece of turf to bring the margin back to just 11 points at the final change.

The second gave his side some real momentum heading into three-quarter time as he swung the ball through with the breeze as the siren sounded.

But the 22-year-old from Nuriootpa wasn’t finished yet as he followed up Butcher’s third with a left-foot snap having taken advantage from teammate Boyd earning a free kick for holding-the-ball.

This trimmed the margin to four points before Troy Menzel gathered a knock on from Butcher to snap Central into the lead 13 minutes into the fourth term.

Lange then nailed another testing set shot from the boundary line having slid low to take a chest mark, opening up an eight-point lead close to the 16-minute mark.

Bloods pair Brett Turner and Isaac Johnson then had their consecutive behinds followed up by teammate Murray Waite converting his free kick earned when he forced Menzel into a throw with his clamping tackle 15m out.

It was to be the last score, in the 23rd minute, as both sides failed to edge themselves in front during a frantic flurry before the final siren.

Boyd, Menzel (25 disposals and two goals) and skipper Luke Habel, who had 23 possessions streaming out of defence, were all strong performers for the Bulldogs.

Lange finished 12 disposals and five tackles to go with his four goals while Joseph Brown was another major positive for the Dogs in just his second League game having previously lined up with Adelaide’s SANFL side last year.

Nippy Corey Durdin improved on his quiet outing in Round 1, kicking two goals and having 14 touches while Ethan East had 21 possessions for the Bulldogs.

West’s Kaine Stevens was an influence at the stoppages with 12 clearances for his 26 disposals while former SANFL Crow Jordan Boyle had 27 and defender Aaron Anderson 26.

The return of unheralded midfielder Josh Schiller, who was a late withdrawal in Round 1 with a back complaint, was another plus for Westies as he chalked up 23 disposals, seven tackles and five clearances.

Bloods skipper Keough made the most of his 13 disposals and seven marks to convert three goals while Johnson was creative in chalking up 19 touches and a goal.